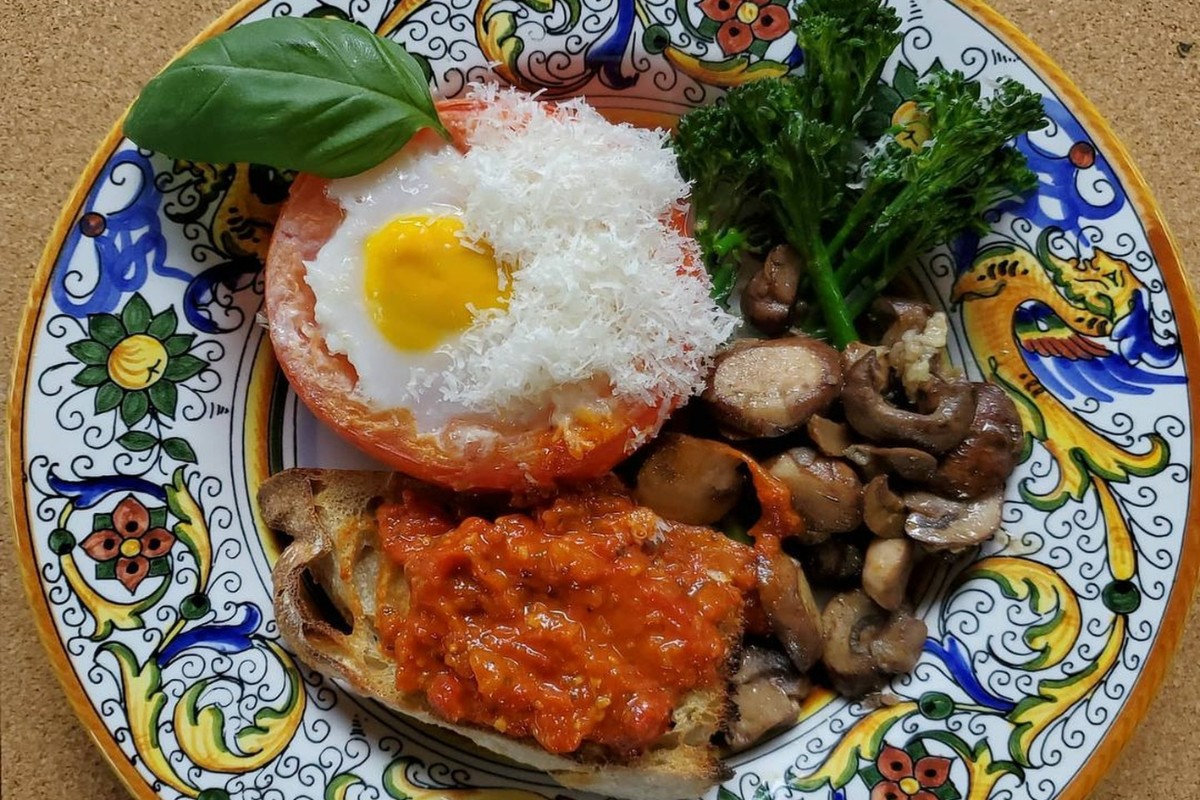 Around the Bailliages on social media

" examples of how egg played a significant part in the celebrations "

World Chaîne Day (WCD) was enthusiastically celebrated around Italy - led as usual by Bailli Délégué Roberto Zanghi and his wife, Petra who is a Pair de la Chaîne. Below are examples of how egg played a significant part in the celebrations.

The Bailliage of Amphisya Calabria (Bailli Antonella Sotira) took the opportunity of World Chaîne Day to make a “mind-blowing” [Ed. their words] announcement that His Majesty King Peperoncino invited everyone to Rome for the first Spicy Liberation Day free from the pandemic - a moment to unleash joy!

Maître Rôtisseur Diana Zerilli of Enoteca Gatto in Milan posted on social media: “On World Chaîne Day we will prepare a dish with my favourite eggs. Which ones? Those from our hen house of course.” [Ed. The Gatto wine shop is a family business established in 2016 by Pasquale Gatto and his wife, Diana Zerilli. The Enoteca is a shop of taste where you can savour rich platters of artisan cured meats and cheeses from all over Italy, not to mention 300+ Italian wines carefully selected by Pasquale & Diana.]

Chef Rôtisseur Kevin Maura of the Bar Pasticceria Il Capriccio in Ceccano, a town in the province of Frosinone in Lazio, central Italy, followed the WCD “egg” theme with a dish of fried egg yolk flavoured with liquorice set on a mashed potato mousse with Grana Padano cheese.

Marcela Amezquita, who is a Dame de la Chaîne, hails from Mexico but is now living in Guidonia Montecelio, commonly known as Guidonia, a town and commune in the Metropolitan City of Rome.

He followed it with a “Most EGGstraordinary Brunch” commencing with Bloody Mary devilled eggs, a trio of baby egg soufflés (Gruyère, herb and Jamón Ibérico) and a quail’s egg croque madame.

The brunch continued with “Eggs in overcoats with Oscietra caviar”, “Oysters on the half shell”, “Lemon asparagus with prosciutto, Stravecchio Parmigiano-Reggiano and poached egg”, “Lobster Benedict”, “Hariyali egg ghotala” and “Arpège eggs provençal”. Dessert of chilled zabaglione with seasonal fruits concluded what had been an “egg fest” very much in keeping with the WCD theme.

Chef Rôtisseur Najada Frasheri, who works at the Tenuta di Artimino, an ancient Medici estate surrounded by the Tuscan countryside, overlooking vineyards and olive groves, posted her WCD photo in a tribute to Dante’s “The Divine Comedy”. This long Italian narrative poem was completed a year before Dante’s death in 1321. It is widely considered to be the pre-eminent work in Italian literature and one of the greatest works of world literature. Her menu comprised three elements taken from Dante’s masterpiece:
- “Inferno” - square passatelli
- “Purgatorio” - cream of stracchino cheese with pepper and fried egg white
- “Paradiso”: fried yolk

The Bailliage of Novara, Lomellina, Lago Maggiore (Bailli Giorgio Palma) posted a photo of an egg in almond crust. Once again, in keeping with the WCD egg theme.