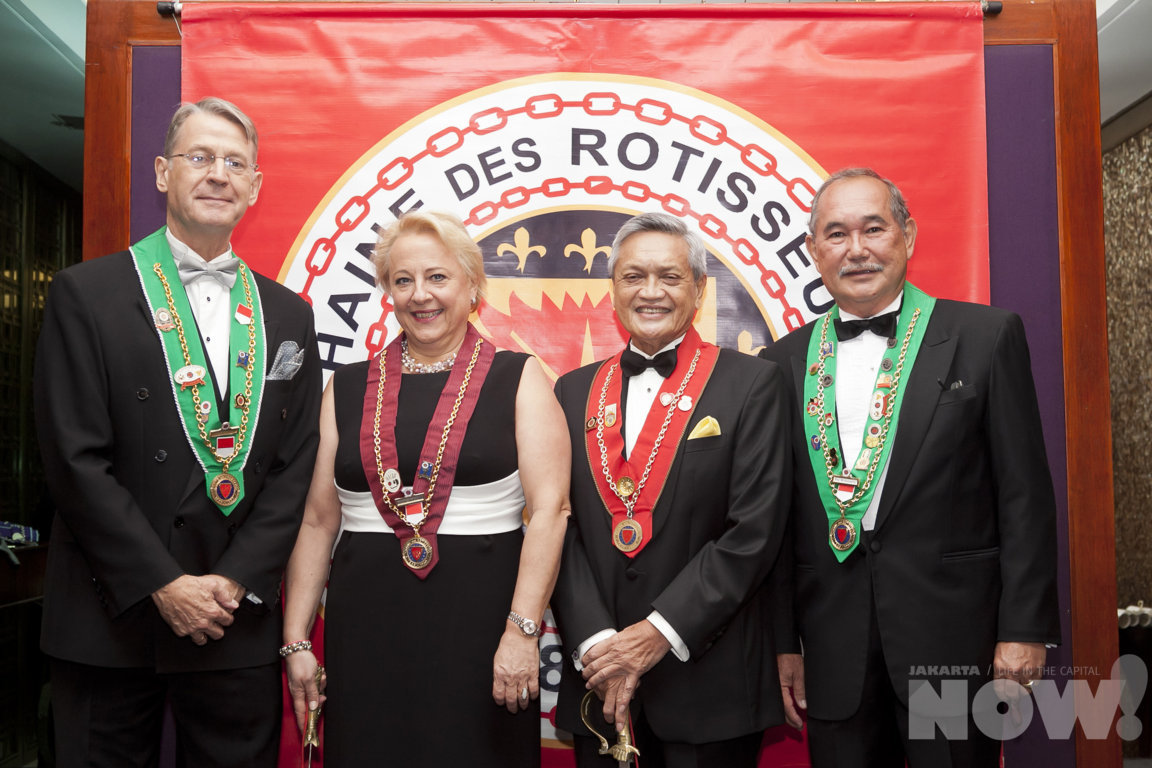 A magnificent gala event was hosted at Raffles Hotel to welcome new members to the Chaîne and at the same time to honour members being promoted for their valuable contributions.

The Induction Ceremony was presided over by Bailli Délégué Firdaus Siddik in his capacity as a Member of the Conseil Magistral. Firdaus flew from his home on Bali for the grand occasion at which other notable guests were Her Excellency Helene Steinhausl, Ambassador of Austria, who received her Chaîne regalia at the ceremony, and His Excellency Jean-Charles Berthonnet, Ambassador of France.

At the reception Negroni cocktails and Champagne were enjoyed with delicious canapes. Very much a ‘royal’ affair with the gentlemen in dapper tuxedos and the ladies dressed in elegant ball gowns.

The ballroom looked spectacular with a long table beautifully decorated with stunning centre pieces. Once all 60 guests were seated, they were serenaded by the dulcet tones of the jazz ensemble while a gastronomic symphony was orchestrated by the talented new Executive Chef Matias Ayala and his culinary team.

Hailing from Argentina, Chef Matias' signature dishes are characterized by bold flavours and vibrant colours in his plate presentations.

True to his roots - Argentinians being meat aficionados - the Chef's 72 degree sous-vide short-rib roast with rainbow carrots was superb, especially when paired with the intense black fruits and peppery notes of Côte du Rhône ‘Coudulet de Beaucastel’ 2015 produced by the Famille Perrin.

The last course was a chocolate sphere liquid nitro served with Descendientes De J. Palacios ‘Petalos’ 2016 from Bierzo in Spain. What made the dessert mind blowing was that the entire bowl (the size of a coconut) that held the content of the liquid nitro was actually sculpted chocolate making it fully edible. That definitely made an impressive grand finale!

As tradition calls, an award appreciation was presented to Yves Mudry, General Manager of Raffles Hotel, who has always been a gracious host for our Bailliage events.

All in all it was an impeccable event with everyone working together in true Chaîne spirit!