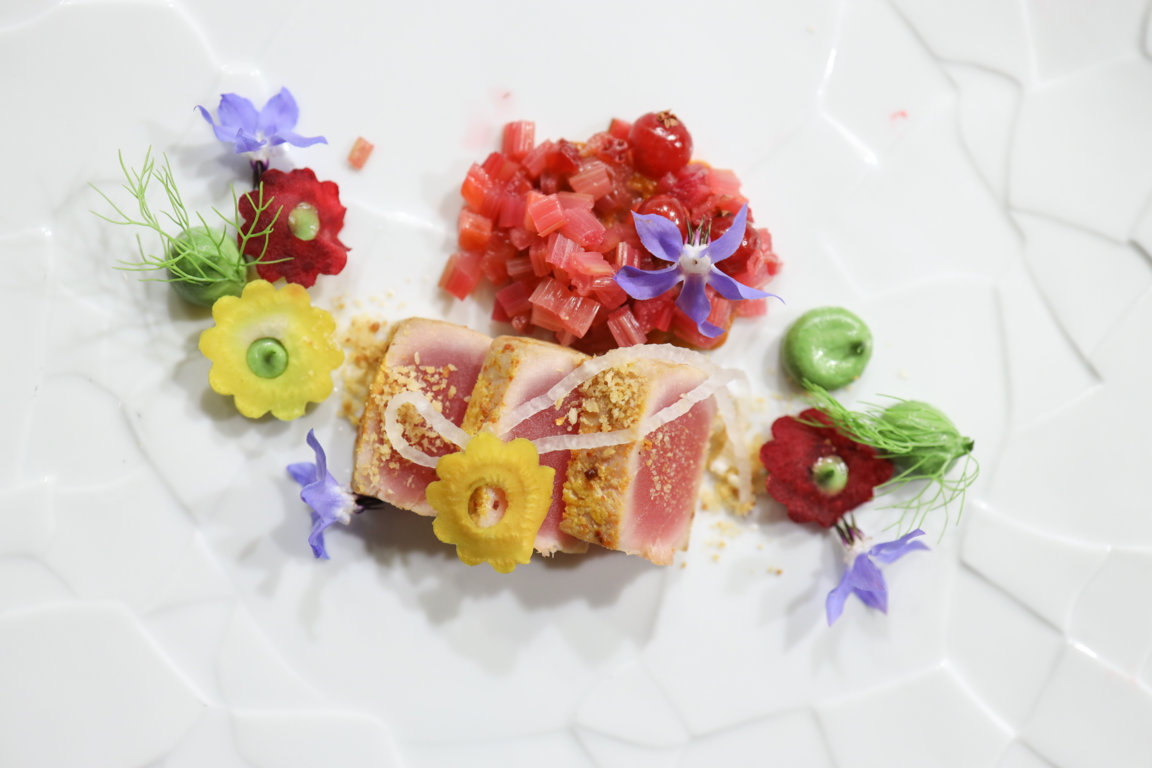 Celebrating our 10th anniversary
" the presentation of each dish was exquisite "

A perfect symphony of colour, texture and taste awaited the 64 diners who gathered to celebrate our 10th anniversary under a starry canopy at the beautiful Al Bustan Palace, a Ritz-Carlton Hotel.

As well as inductions and promotions, the Induction Ceremony saw members who have been a part of the Chaîne since its inception in the Sultanate in 2010 being awarded their Commandeur Silver badge.

The theme of the evening was a special nod to the Bailliage’s 10th anniversary: “Ten years… Ten stars - a gastronomic tour of the most celebrated Michelin star restaurants by the Ritz-Carlton”.

Aqua*** at The Ritz-Carlton, Wolfsburg
Strawberry and Champagne sorbet

To begin with, the presentation of each dish was exquisite. The terracotta crisp top to the pearly white scallops, the rice crackers shaped like flowers sitting next to the palest of cream and yellow edible flowers holding its own over the purple and burgundy ones, the moss green wraps floating in a pale peach gingery base. Quite simply, poetry.

The artistry and creativity that went into the ‘flowers of spring’ theme that was carried across each dish added further to the enjoyment of the diners and the ‘chocolate tree’ with bonbons as ‘flowers’ on each table served with the coffee, was almost too pretty to eat.

Each dish tasted even better than it looked. The subtle blending of flavours within the immense complexity of each dish was flawlessly executed. Truly a Michelin star experience! Members who participated in the tasting and enjoyed it absolutely knew it was going to be a stiff challenge to replicate the same experience for such a large number of people. They came away that evening saying that some of the dishes, if possible, were even better than at the tasting.

The professionalism of the staff and seamless service allowed the elaborate dinner to be served in just under two and a half hours. The sound of the breaking waves in the background combined with gentle, cascading tones of a harp set the tone for what members described as one of the best dinners of the season.

It is amazing that our Chapitre might have been the last Chaîne event before the shutters came down around the world. Ours was a difficult decision to either go ahead with or cancel the event. But as the Omani government guidelines were still allowing such private events at the time we decided to proceed with the dinner.

As this was our 10-year anniversary, I had sent out invitations to the neighbouring Bailliages of Saudi Arabia, Kuwait, Bahrain and the United Arab Emirates. We did get many expressions of interest for such a cross-border event, but in the end the coronavirus situation overtook all but the UAE. The other countries had closed their airspace only days before the dinner.

In the end we did have six guests from the UAE who drove down. One of them was suffering from a common cold, but to pre-empt any health checks at the border, she took a Covid-19 test in Dubai which turned out negative and was her "ticket" for the border crossing. Talk about dedication!

The event itself was wonderful. Recipes were gathered from their most celebrated restaurants worldwide which boasted a total of 10 Michelin stars.

It was a testament to the skill of the local Ritz Carlton chefs that not only did they prepare the various courses to perfection, even though you can well imagine they weren't the simplest to cook, but they also managed to incorporate each of the courses into an overall culinary theme.

I could carry on waxing lyrically about this dinner. It is events like these that make one proud and grateful to be a member of the Chaîne des Rôtisseurs. They unleash the very best from the Professionals who are inspired to cook at the very pinnacle of their ability for an appreciative group like ours.