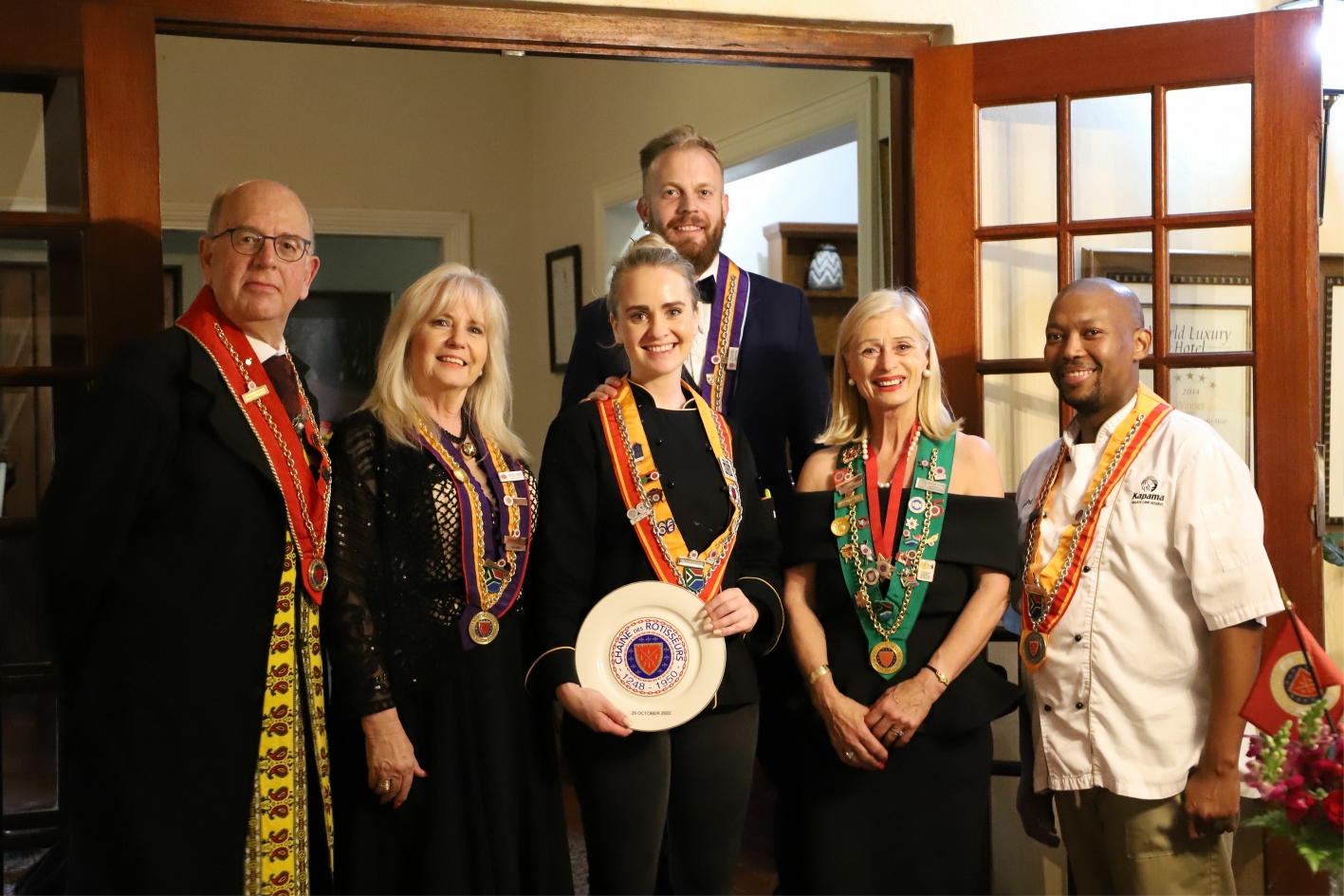 Highgrove House Country Hotel goes above and beyond!
" The dinner was an honoured devotion of fine food .. created by Maître Rotisseur Ashlynne Scott "

Our Chapitre was hosted at the beautiful, award-winning 5-star establishment Highgrove House Country Hotel owned by Officier Maître Hotelier Kathy Russell. Nestled in the sub-tropical terrain of White River, a sanctuary amongst the rolling hills and endless forests of Mpumalanga just 20 minutes away from the world-renowned Kruger National Park.

The Induction Ceremony took place in the former macadamia and avocado packing house, now a wedding barn with beautiful crystal chandeliers. Bailli Istell Carlin welcomed Bailli Délégué François Ferreira, who is a Member of the Conseil Magistral together with Chancelier Argentier Llewellyn Marais, other honoured guests and members and friends of the Chaîne.

Inducting Officer François officially declared the Induction Ceremony open and gave an overview of the Chaîne’s history and its worldwide significance. After which François proceeded to induct 29 new Chaîne members, promoted eight with other awards being bestowed. Five were welcomed into the Ordre Mondial des Gourmets Dégustateurs (OMGD).

After the formalities everyone meandered to the Manor House Gazebo’s beautiful garden where, overlooking the valley, canapés were served accompanied by wine provided by Vice-Échanson of Lowveld Toine Schoeman and Kris Snyman from Vrede en Lust Wine Estate. The occasion lent itself to Maître Restaurateur Ryan Russell and Chevalier Stuart Russell performing sabrage whilst classical musicians entertained everyone.

Then we were invited to the formal dining area in the Manor House where everyone was welcomed to enjoy camaraderie of the table in true Chaîne Lowveld style.

The wonderful evening ended on a high note with a blazon bestowed upon Officier Maître Hotelier Kathy Russell. Special words of appreciation were expressed towards Maître Restaurateur Ryan Russell and the Russell family for their hospitality and to Kris Snyman from Vrede en Lust Wine Estate. Accolades included awarding a Presentation Plate and Certificates of Merit to the Executive Chef, members of the Highgrove staff and students from the Chefs Training and Innovation Academy Nelspruit.

Words of appreciation were shared with everyone involved in the organisation and execution leading to the spectacular and successful Chapitre.