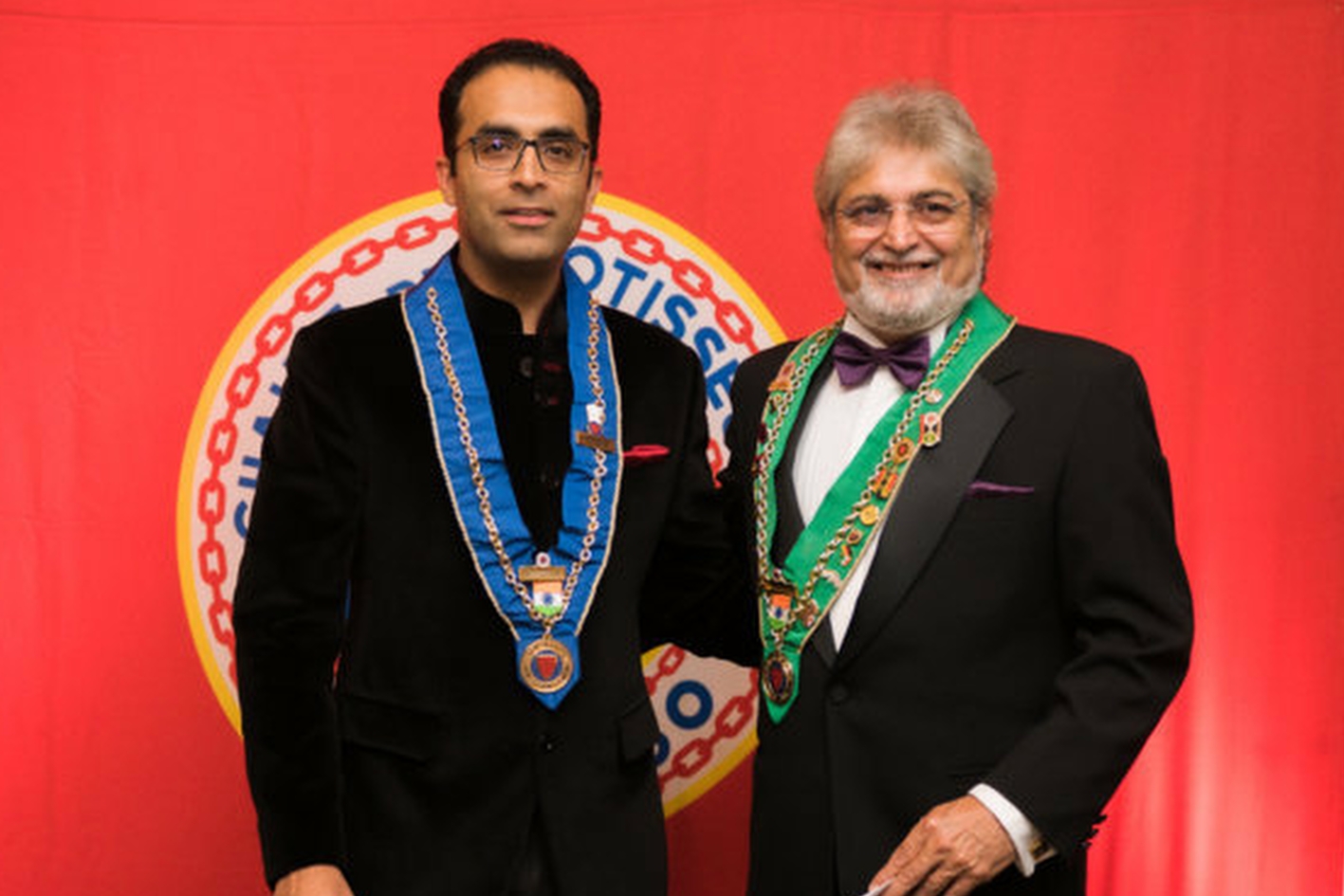 Spectacular evening at The Leela Palace
" the dinner was a 'tour-de-force' both in its scale and beauty! "

The Bailliage held its 2022 Chapitre at the fabulous Leela Palace Bangalore.

The Induction Ceremony began with the assembly of inductees, members and guests at high tea. When everyone had arrived and seated in the Induction Hall as per convention, the ceremony commenced with the formal entrance of the Induction Party. Thirty-two inductees were bestowed with their insignia of office or grade.

Once the ceremony had ended everyone processed to Royal Ballroom for the reception and Gala Dinner.

The glittering gathering of members and guests in formal evening wear and insignias was spectacular. We were treated to delectable sparkling wine and “classic” cocktails, accompanied by beautifully crafted hors d’oeuvres and canapés before dinner.

Madhav Sehgal, the newly promoted Conseiller Culinaire who is General Manager of The Leela Palace, together with Maître Rôtisseur Mir Zafar Ali, the hotel’s Director of Operations, ensured that the dinner was a ‘tour-de-force’ both in its scale and beauty!

The concept sought to recreate the fabulous recipes and presentations of Auguste Escoffier “The King of Cooks and the Cook of Kings”. The dishes - literally, all of the hundreds served this evening - were inspired by the exposition of classical French Cuisine, by the ‘world’s greatest chef’; and his renowned books, including his magnum opus, “Larousse Gastronomique”.

In the opinion of all who were fortunate to experience this event it was outstandingly successful and unsurpassed by any previous dinner. The bar has been raised!

A monumental effort by the Leela Palace team created a ‘mega stage’ to showcase the culinary extravaganza to follow!

The uber-luxurious Royal Ballroom was set-up in two parts:

First: a complete and fully functioning period-style kitchen created from scratch and installed inside the Royal Ballroom where the food was finished and conveyed to the diners.

Second: the dining room was ‘dressed to the nines’ in that formal yet striking fashion of the early years of the previous century! Dining tables were laid with stunningly beautiful floral, fruit and vegetable centre pieces interspersed with elegant candelabra. We were offered an incredible array of cold dishes - cheeses, saucisson and hams, pâtés, confit meats, rillettes, pickled and marinated seafood; ‘en chaud froid’ or ‘en aspic’ plus breads of every kind, all for the diner to ‘graze’ upon.

Every dish reinforced the depth and thoughtfulness of these unforgettable classics. Very fine wines were served with each course.

The meal ended (or did it begin again!) with the rolling-in of groaning antique wooden trolleys laden with towering croquembouche, mille-feuilles, choux, macrons, madeleines, tarte Tatin, bombe Alaska and much, much more!!!

One mustn’t forget the beautiful and atmospherically apt period music with live entertainment that accompanied our nearly four-and-a-half-hour-long meal!

The event concluded with a heartfelt vote of thanks, accompanied with a standing ovation, for the kitchen and service brigades and the Operations Team that run the Leela Palace Bangalore. This wonderful gem of an establishment continues to light up the firmament of the Chaîne in India!