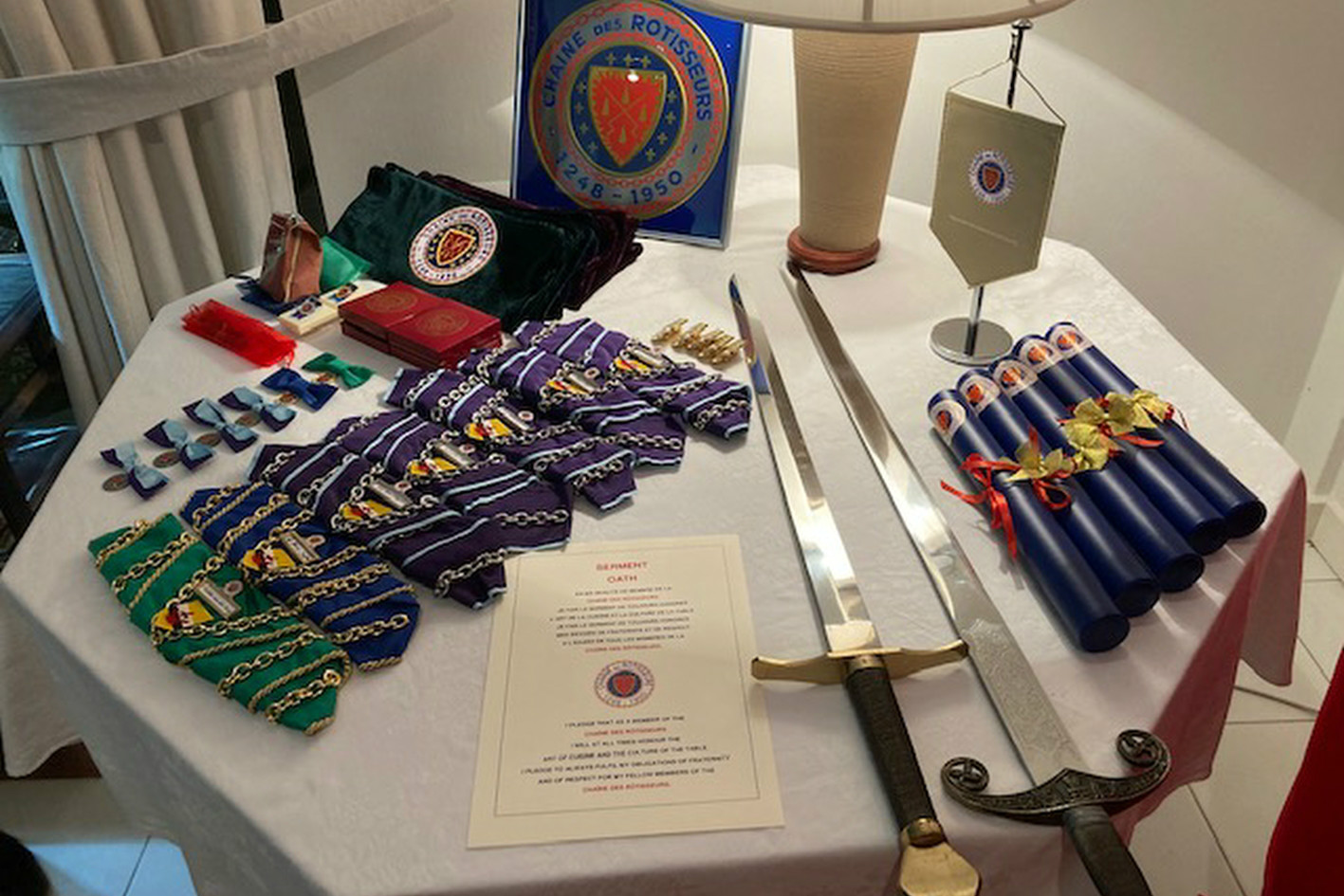 Chapitre, Corona and Les Canards of Brunei
Celebrating 30 years of Camaraderie and the Culinary Arts
Congratulating our Commandeurs
Citing our Oaths to the Chaîne

We held our Chapitre at the residence of Chevalier d’Honneur His Excellency Christian Ramage, the French Ambassador.

The Chapitre marked the 30th Anniversary of the National Bailliage, founded on January 1, 1990 in Bandar Seri Begawan.

Later in the year, Peter Alatsas, then Sheraton Hotel’s General Manager was inducted as the first Bailli Délégué by the late Dato Lau of Malaysia.

In 2020 our Induction Ceremony, officiated by Bailli Délégué Honoraire Dr. Henry Kwok Chin Boon, formed a splendid start to the evening. He explained of the coat of arms: two crossed turning spits, encircled by fleur-de-lis surrounded by an inner and outer chain, the bonds uniting all members.

Henry proceeded to confirm the promotions of Nicoline van den Berg-Alma as the first lady Bailli Délégué of Brunei and Bettina Salher as the Bailliage’s first lady Chancelier. This was followed by the inductions of the Dames de la Chaîne and new Chevaliers, performed by the touch of a sword on both shoulders, in accord with the Chaîne’s ancient legacy.

The Officier Commandeur Gold badge was awarded to Chargé de Missions Honoraire Kenneth Davies, a founding member of the National Bailliage, in recognition of his exceptional service and dedication over the past 30 years.

Members and guests were then invited to a vin d’honneur featuring Champagne Moët et Chandon Brut Impérial NV on the patio. Against the stunning backdrop of the new 30 km long Sultan Haji Omar ‘Ali Saifuddien bridge lit up under a shimmering night sky, overlooking a tranquil Brunei Bay it was magical.

Dr Kwok formally opened the Gala Dinner. His Excellency Christian Ramage shared his views on what makes the Chaîne des Rôtisseurs such a phenomenal International Association of Gastronomy. Representing as it does the best of French traditions amongst professional chefs and amateur members, established in over 80 countries worldwide.

Nicoline van den Berg-Alma gave a brief outline history of the past 30 years of the Chaîne in Brunei during her opening speech as Bailli Délégué. Chancelier Bettina Salher presented His Excellency Christian and Mme Brigitte Ramage with a gift as a token of appreciation for generously sponsoring the dinner.

The brigade of waiting staff, attired in black masks with white gloves, following COVID-19 precautions, commenced the delivery of an exquisite Anniversary Dinner at the festively decorated tables.

Inspired by the traditions of the Guild of Goose Roasters, the menu respected and reflected the gastronomic roots of culinary excellence in southwest France.

Duck rillettes and the Temburong duck confit, were both unique. We delighted at His Excellency’s significant efforts in sourcing local Bruneian duck deep in the tropical Borneo rainforest. The Temburong sourced duck courses were lovingly prepared to the rich flavours of the French Sud-Ouest.

This sumptuous dinner was cooked to perfection by French Residence Chef Edna Boqueo, and her meticulous kitchen brigade, under a unique set of challenges presented by the COVID-19 import restrictions.

Coffee and tea
After dinner spirits

The selection of the Ambassador’s finest cheeses from the Fromagerie de Versailles was magnificently complemented by the elegant Saint-Ėmilion. A balanced, fruity blend of Merlot and Cabernet Sauvignon with silky notes of red fruits, spices and cinnamon. It was perfectly paired with the duck and rounded off the delicious gateaux and poached pears in the “Trio of desserts”.

As in every part of the world, 2020 will be remembered by the Bailliage members as a most extraordinary year bringing so many changes from an extreme lockdown to the unprecedented relaxing of restrictions for social gatherings in Brunei starting end of July.

COVID-19 has looked favourably upon our country these past few months, with negligible community spread, which allowed this 30th Anniversary Chapitre to proceed.

We appreciate the enormous help and support in preparations of ribbons, insignia, badges and certificates by all the lovely ladies at the International Headquarters in Paris.

Bailli Délégué Nicoline Alma, on behalf of all present, extended her appreciation to His Excellency the Ambassador and his wife, Brigitte, for their generous hospitality and excellent collaboration throughout the past few years.

Valuing new and existing members, promoting excellence in gastronomy and uniting those to whom gastronomy has a passionate appeal are our aspirations.