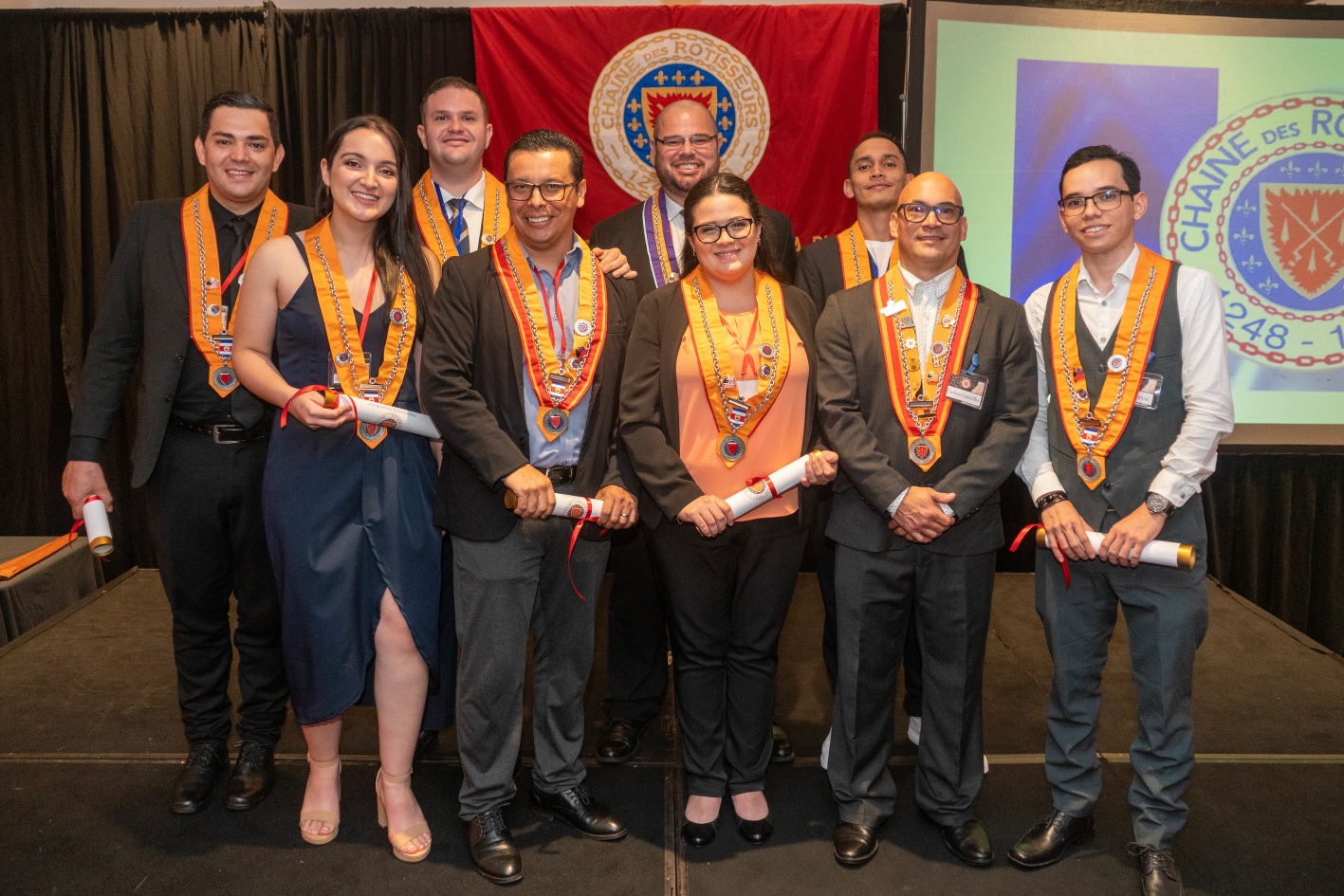 An evening of harmony and recognition
" The special presence of International Vice-President Marie Jones, together with Costa Rica’s Minister of Tourism, William Rodríguez López, gave a great highlight to the Gala Evening "

The majestic Costa Rica Marriott Hacienda Belén Hotel, located on the outskirts of the Costa Rican capital, was the perfect setting for this Chapitre.

The special presence of International Vice-President Marie Jones, together with Costa Rica’s Minister of Tourism, William Rodríguez López, gave a great highlight to the Gala Evening.

As you enter the hotel, on both sides of the boulevard are coffee plantations which, with many others across the country, give the crop that has given Costa Rica worldwide fame for its quality.

The reception was held a few metres from said plantations. Guests enjoyed a sparkling wine from Bodega López in Mendoza, Argentina, accompanied by prosciutto with melon, goat’s cheese crusted grapes and pistachio.

For the National Bailliage, the attendance of both dignitaries was a great honour and privilege. In the case of International Vice-President Marie Jones, it was the first time she had visited Costa Rica. Marie said she was impressed both by the natural beauty of the country as well as by the gastronomy.

Before the Induction Ceremony, Tourism Minister William Ramírez, thanked the group for the invitation to participate in the event. He referred to the efforts made in the country these past 10 years to take to another level and give more importance to Costa Rican gastronomy.

“In Latin America and in many parts of the world there are great movements to create gastronomic destinations and Costa Rica is no exception”, commented the government representative, who congratulated the Bailliage of Costa Rica for its contribution in this field.

Marie then inducted 24 new members, including William Rodríguez, as well as those who received promotions. During the ceremony, Marie paid a well-deserved tribute to Bailli Délégué Alain Taulère who is a Member of the Conseil Magistral. He received his “Grand Officer Commandeur” Award as a result of 50 years of Chaîne membership. In addition, Marie presented Alain with the Chaîne’s Silver Medal in recognition of outstanding contribution to the association.

With the inductions and presentations concluded, the members and their guests proceeded to the hotel’s Isabella Restaurant to enjoy the Gala Dinner prepared by Carlos Castrillo, Executive Chef of the Costa Rica Marriott Hacienda Belén Hotel.

The first course consisted of authentic buffalo burrada on pine nut oil and citrus segments. The pairing was with Las Perdices Malbec Rosé from Viña Las Perdices in Mendoza, Argentina.

For the second course, a cream of mushroom in a puff pastry crust and white truffle oil was served. It was harmonized with the Viña Las Perdices Reserva Chardonnay.

There followed a corvina carpaccio sprinkled with virgin olive oil, old mustard, sliced strawberries and shavings of black garlic, which was accompanied by La Carmina Albariño, a DO Riax Baixas from Bodega Tamara in Ribera de Douro, Spain.

Before the main course and to cleanse the palate a naranjilla sorbet intermezzo was enjoyed.

The main course was rack of lamb in its own juices with rosemary, placed on a crisp Israeli couscous with saffron and dried carrots. The accompanying wine was from the southern Rhône Valley in France: Lirac Rouge ‘Baron Louis’ by Château de Montfaucon.

Concluding the menu was a dessert known in most of Spain as “crema catalana”, but as “crema cremada” in Catalan cuisine. It is like crème brûlée, the difference being that the Catalan version is made with milk rather than cream.

Many of the guests also took the opportunity to taste good coffee, naturally grown and processed in Costa Rica.

Based on a detailed report by Miguel Barboza, Chargé de Presse